Carmina Clericorum out and available 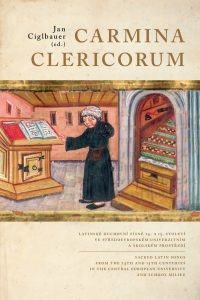 Carmina Clericorum: Sacred Latin Songs from the 14th and 15th centuries in the Central European University and School milieu, the fourth volume of the series Monumenta Liturgica Bohemica (L. Marek Publishing) was published.

The edition was prepared by Jan Ciglbauer, in collaboration with philologists and medievists Martin Bažil, Adéla Ebersonová, and Henry Howard. The volume brings a critical edition of 32 songs based on 101 records, encoded in the critical apparatus, an introductory study in Czech and English.

The description “student song of the Late Middle Ages” covers more than merely love songs and drinking songs in Latin and the vernacular. An important part of student life in the fourteenth and fifteenth centuries in Central Europe was the worship in college chapels: specifically morning and evening prayers whose central chants were Marian antiphons. Members of university communities created well thought-out and melodically appealing sacred songs whose texts draw much of their inspiration from the Old Testament and ancient mythology, while at the same time reflecting an unrestrained and innovative student creativity. This edition tracks the transformation of songs that emerged from the student milieu and entered the repertoire of the Latin schools during the fifteenth century, presenting a critical edition of compositions whose music has not previously been available. In a few cases, it brings to light entirely unknown pieces from newly discovered manuscripts. Rhythm is suggested for the syllabic parts of the songs, based on simple rhythmic notations used in some manuscripts, and the meaning of the texts is made more accessible with translations into Czech and English.