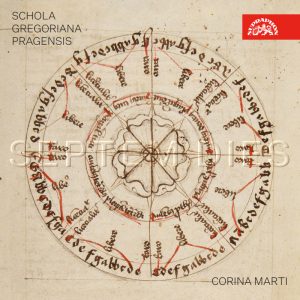 11 June 2021 will see the publication of Septem Dies: Music at Prague University = Music at Prague University 1360-1460, which was born out of the Sound Memories project. It was co-authored by members of our Institute, Jan Ciglbauer, David Eben and Lenka Hlávková. The musical realization is the work of Schola Gregoriana Pragensis and Corina Marti, musicians who collaborated with the Sound Memories project as associate partners.

People in the 21st century are not used to automatically associating university with music. In the Middle Ages, however, the two worlds were complementarily linked. The Septem Dies project is a unique reconstruction of the musical environment that might have surrounded a student who visited the University of Prague in the mid-15th century. The basis of the recording is a musicological analysis of the statutes of the Reček College from 1438 and its earliest library catalogues. The title Septem Dies – seven days – refers to the college rules embodied in the founding charter. Jan Reček, the founder of the college, specified the thematic content of the individual days of the week. These provisions became the basis for the dramaturgy of the recording. It can be assumed that the themes of each day were reflected not only in the college liturgy, but also in the music that the students created in their community. The music on this recording – including a number of previously unrecorded compositions – comes from manuscript sources of Central European provenance that are consistent in type and content with the college catalogue records. The manuscripts come either directly from the university environment or were written by university graduates. The recording and accompanying study juxtapose liturgical music and compositions that students probably performed in their spare time. It is the result of a unique collaboration between musicians and musicologists who have attempted to approach the creativity of medieval students through their specific methods and experiences.